In line with my interest in cultural traditions and belief systems, I thought it was a good time to get in a few words about Beltane.

Who didn’t enjoy frolics in the forest, titter at the mention of the Maypole, its phallic implications that induced the dancing, grinding and carrying on in days of old?

Oh, only me? Fine then… Read about the origins as presented by paganwiccan.about.com or a tamed-down version from Wikipedia.

Permit me to offer a teaser from the hide and seek excerpt in The Year of the Rabbit, as the youngsters begin their game of hide and seek after a neighbourhood BBQ:

That’s not fair, she thought, Daniel said no going beyond the raspberry patch. That cheat!

Sera decided to follow them, creeping from tree to tree and bush to bush as she watched them climb up the slope towards the forest.

Walter finished counting, “ninety-eight, ninety-nine, ONE HUNDRED!,” then hollered, “Ready or not here I come!” He turned and scanned the Fletcher’s large back yard and from the corner of his eye, noticed one of the twins’ heads peering over the rock behind one of the gardens.

No, he thought, Too easy. I’m going to find Daniel first, that smart-ass! He straightened and smoothed his long braided tresses on each side of his head and sniffed the air, catching the lingering scent of the barbecue, cherry blossoms, lilacs and…Amy’s perfume.

Channel Number 5, here I come, he snickered to himself, You were practically hanging off the poor guy all evening. You’re probably stuck to him right now.

You can read more at the novel’s blog.

As a bonus, here is a poetic offering about Beltane, Robin Greenwood and the origins of a certain family name:

Let us have a little fun,
With the surname ‘Robinson’.
In a book I unearthed recently,
Was revealed some family history.

To appreciate, we must turn the pages,
To Europe during the middle ages.
There still survived some Pagan ways,
In the celebrations of those days.

One that promises to be interesting,
Has to do with the rites of spring,
With the Maypole and its decorations,
Which had phallic implications.

By now this story is getting good.
As we learn of activities in the wood.
For the young, sweet maids were led,
To visit a soft, warm forest bed.

Greeting the Green Knight whose name,
Was Robin – with his special game.
The maidens received their initiation,
Into spring rites and procreation.

I’m not aware if they put up a fight,
Or were willing players in this rite.
Perhaps their primal urges released,
And led them into the carnal feast.

Hence in the cold days of February,
Before the girls had a chance to marry,
The arrival of the bastards had begun,
And were named the ‘sons of Robin’ – or Robinson.

Blue blood I guess was not to be,
Coursing veins of our family tree.
Now when I encounter a forest scene,
I feel red blooded – with a touch of green.

Source and inspiration:  The book “The Elixir and the Stone – Unlocking the Ancient Mysteries of the Occult. Here’s a meandering review written under a different name: http://web.ncf.ca/co848/oldsh1t/reviews/review-elixirstone.pdf

Thanks for dropping by.  Wishing you a very merry month of May 🙂

In a previous post, readers were introduced to You can call me anything.

I’m feeling teary-eyed and nostalgic today so this entry will cover This about that as mentioned elsewhere in my wide web of wordiness.

From what I’ve acquired from my late father’s Muskoka’isms, it is idle chatter, small talk filling in the silence, the void between two physical beings. In some way though, the chat would bring us to some deeper subject, some connection to our lives, those of others and how they intertwine during our short performance on this beautiful theatre in the round.

“Well, it’s nice to hear this about that,” my dear old Dad would chime from the other end of the telephone. After his passing away in 2001, I missed our monthly chats with the kids piping in to talk with him and ask about Sylvester, my old, fat cat who still resided at the homestead. I miss my Dad and his small town ways, his slow saunter through his village, his soft heart, his stories and his lush, experimental gardens. 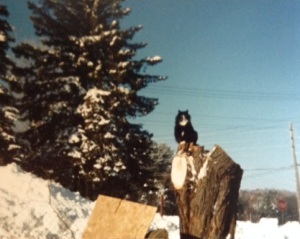 Birthday poster created by the author as an awkward young adult

Giant prize pumpkin circa 1986. These things reminded me of the “pods” in Body Snatchers!

I miss those simpler times when there was no super information highway, no shameless theft of intellectual property or electronic scams, spams and phishes. The only phishes we knew were the fishes he tried to catch through a hole in the frozen Muskoka lakes and bays. There were walks to the post office, the corner store, chats with neighbours and porch chair sessions in view of the intersection, the towering sunflowers, busy bird feeders and the hungry, hungry giant pumpkins. THAT was interactive.

You can read ten years’ worth of This About That posts under my different names of days gone by, and witness the birth and evolution of my novel, The Year of the Rabbit. You can obtain an electronic sample from my publisher.

Thanks for dropping by.

You know that embarrassing situation when you forget a person’s name?

How about as a parent – have you ever chided one of your offspring in the wrong name by mistake? Imagine the frequent, frustrated outbursts from a mother of 11 kids!

This episode of Muskokaisms introduces “You can call me anything”.

I can recall that Dad used to recite this often when addressed by the wrong name or characteristic descriptor, “You can call me anything. Just don’t call me late for dinner!”

In The Year of the Rabbit, Father Gio faced a social stressor when wanting to address one of the Fletcher twins. You can read an excerpt here.

Previous Muskokaism: Much in what you say

Catch you next time. Thanks for dropping by.

In the previous post we learned about the financial risks of giving canaries to cats.

This week we explore the Muskokaism (or Dadism) of Much in what you say.

We used to hear Dad use this expression often in a conversation with someone who seemed adamant in getting a point across.  I think it was Dad’s way of acknowledging their opinion yet maybe just wanting to politely end the conversation soon.

Next time:  You can call me anything…

Thanks for dropping by.

Join me as we wind back the time in Ottawa.

By, about, and for school archivists

Tales From An Open Book

~ Art, cats, nature, animals, weather, and whatever. Painter at heart ~

"Friends don’t let friends get spied on.' - Richard Stallman, President of the Free Software Foundation and longtime advocate of privacy in technology.

Looking Out the Window

sights, sounds and thoughts that come when looking out the window

A blog about stuff, mostly Black, mostly lesbian, all me.

Recreating family history one piece at a time.