This series of pages and related blog posts will contain anecdotes about kindness and harmony, with frequent appearances by household cats. I will recycle content from that other blog where the tabby cat rules.

Back in Muskoka, there were always cats around our house. My ten older siblings brought home stray dogs, orphaned raccoons, squirrels and even a wounded raven from the woods nearby. I constantly pleaded for a puppy. Dad’s response was “What would you want a puppy for when you’ve got me?”.

I was not pleased.

The next option was a kitten. I should have learned from my sisters to beg forgiveness after bringing home a stray rather than seeking permission prior. I was such a timid Catholic child.

When I was an awkward teen, my Mother found me a six month old “kitten” from a friend of the family whose mother cat was growing tired of the little imp. I named him Sylvester. Talk about originality… 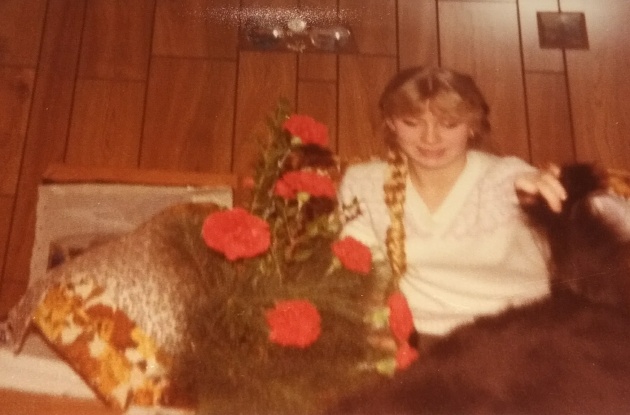 The author and her first cat – her elusive, finicky cat circa 1982

Like most of the pets in our home, he soon grew attached to my Dad, following him around the yard and gardens, and working his way into the man’s heart. 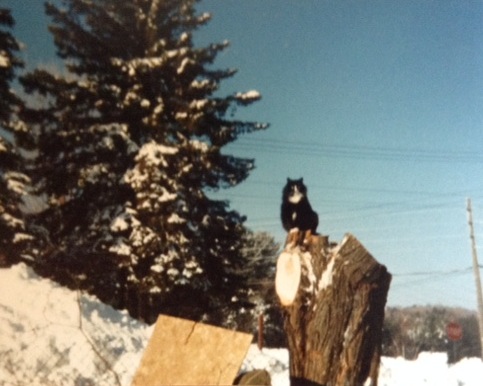 Just like my older siblings who eventually moved away from home, I left my pet behind. He seemed happy keeping Dad company in the gardens and the workshop. Whenever Dad wrote or we chatted on the phone, he would provide an update on the remaining pets. I enjoyed creating illustrations or collages about them. 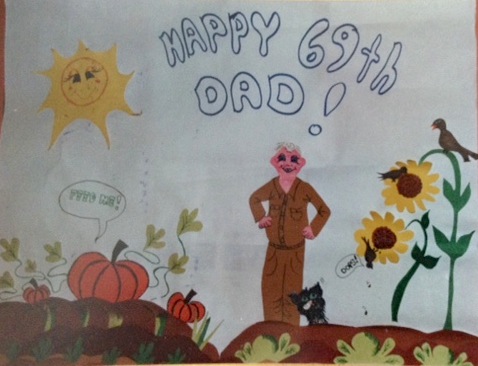 Birthday poster of the gardener and “my” cat

During the years after living away from home, my pets consisted only of budgies. Since they were smaller, they seemed easier to care for. They were messy, noisy little creatures – and one ended up killing the other. I grew distrustful of that beady-eyed survivor.

I felt bad about keeping a bird in a cage. I would often leave the door open for that semblance of freedom but.. hence the messy factor.

A lifetime later and as a middle-aged, divorced woman, I serve two indoor cats. One was a gift for my then teen-aged daughter; the other was adopted from neighbours with the intentions of keeping the female company.

She soon set him straight on who was alpha cat. 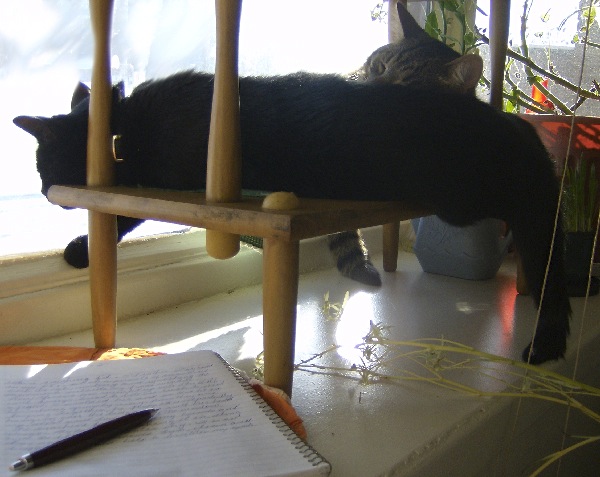 Cats lying in a cramped window shelf circa 2007

They provide plenty of distractions and fodder for my comic creations. 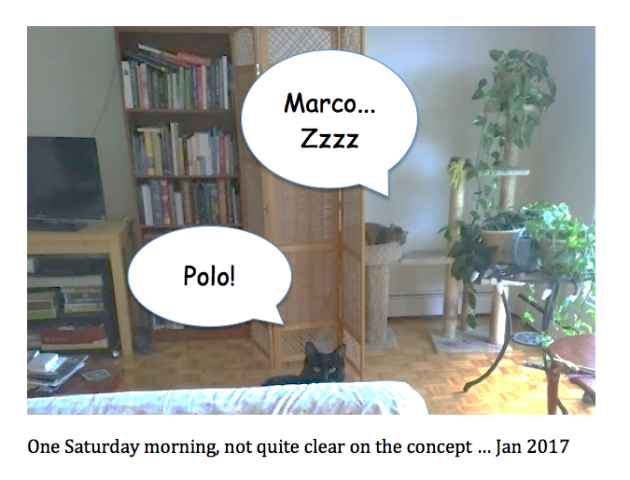 I hope you will enjoy following along. Next: Goddess of Mercy.

This site uses Akismet to reduce spam. Learn how your comment data is processed.

By, about, and for school archivists

Tales From An Open Book

~ Art, cats, nature, animals, weather, and whatever. Painter at heart ~

"Friends don’t let friends get spied on.' - Richard Stallman, President of the Free Software Foundation and longtime advocate of privacy in technology.

Looking Out the Window

sights, sounds and thoughts that come when looking out the window

A blog about stuff, mostly Black, mostly lesbian, all me.

Recreating family history one piece at a time.

A blog about living and writing.